Alcoholism is lonelier when you’re over 50. A Stillwater program is helping. 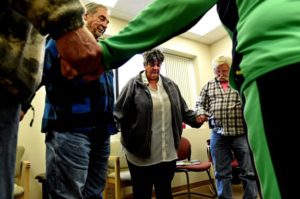 If Vicki Burkhow were younger, she’d be drunk by now.

It’s 2 p.m., a time of day when she was intoxicated for much of her life. Those were the days when she lost her job, was jailed for drunken driving, and “pretty much drank myself to death.”

Now, at 66, staying sober is complicated by the fact that she’s not young anymore. She says one thing has saved her life — a program in Stillwater that is exclusively for senior citizens.

The seniors-only program addresses the loneliness and anger that older drinkers feel. And — most important — it’s affordable for her.

The program was founded two years ago, perfectly timed to meet a soaring demand.

“High-risk drinking” — think DWIs, ambulance rides, fatal falls — by senior citizens jumped by 65 percent from 2002 to 2013, according to a study by the National Institute on Alcohol Abuse and Alcoholism. 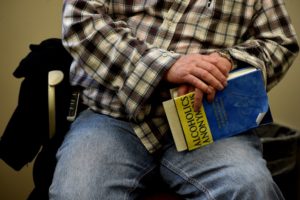 Drinking is increasing for all age groups, and younger people still drink more than those over 65. But drinking by seniors has increased at a faster rate than that of any other age group, with 55 percent reporting drinking alcohol in the past year.

In 2014, two neighbors in Marine on St. Croix decided to do something about it.

Win Miller and Peter Oesterreich were both recovering alcoholics, both over 50.

Oesterreich had just quit his job at the Senior Recovery Center in St. Paul. He said that Minnesota was full of treatment programs, but they catered to the wealthy.

The cost of a one-month stay at a Hazelden clinic is widely reported to be about $28,000, although Minnesota-based Hazelden won’t comment about the costs. The national average in 2011 of $19,000, cited on the website choosehelp.com, is out of reach for typical senior alcoholics, said Oesterreich.

Out of the roughly 350 treatment centers in the state, said Oesterreich, about 140 are for young people.

But for seniors? Only three. “It’s ridiculous,” he said.

Medicare does little to help, he said. Medicare will pay only for a treatment program in a hospital. There are only two in the metro area — St. Joseph’s Hospital in St. Paul and Cambridge Medical Center in Cambridge.

He and Miller knew most treatment programs are licensed by the state, heavily regulated and with plenty of red tape. For example, the software to get into the state’s record-keeping system costs $40,000, said Oesterreich.

Instead of the clinical, hospital-based programs, the two talked about a program based on peer-to-peer meetings in a retreat-like setting. 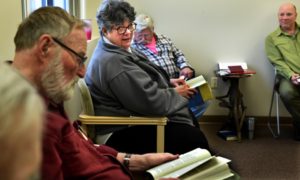 They had connections with other recovering alcoholics, and at their first fund-raising meeting gathered $15,000. Other gifts followed until they had enough to offer scholarships, which allow anyone at any income level to take part.

They were determined to keep costs low. That’s why Miller — the director — doesn’t take a salary. Oesterreich, the director of recovery services, didn’t take one until recently.

They set up shop in an industrial park in Stillwater. There, alcoholics over 50 pay $4,500 for a six-month program. That includes group meetings three times a week and a one-on-one meeting with a counselor weekly.

Only one other program like it exists in the metro area — The Retreat in Wayzata.

HOW ALCOHOLISM CHANGES WHEN YOU GET OLDER

Most Silver Sobriety clients are veterans of all-ages programs. They have heard young people talk about smoking drugs, popping pills, stealing booze from their parents. And they are tired of it.

“Their experience is not mine,” said client Paul B., 67, of St. Paul, who did not want to give his last name.

“We are in a unique situation. We are aging, we have lost a spouse, we have retired. I have arthritis and two hip replacements.”

Added client Burkhow: “I will say, ‘Hey, my hip hurts!’ And believe me, that 22-year-old will not care.”

Senior drinkers are in treatment voluntarily, and are often more serious about recovery. They know — and fear — what they are dealing with.

“Alcoholism is cunning, baffling and powerful,” said Paul B. “You keep thinking: What is this? Why can’t I control this?”

Younger addicts are often ordered by a judge to be in treatment. “They are there to get their licenses back, or to get out of jail,” said Bill, 67, from “a small town in Wisconsin.”

“They are not there to save their own life, like I was.”

“I always drank alone. I drank in the garage or in the pole barn,” said Chuck D., 73, Stillwater, who started to get drunk after he retired.

Seniors are often cynical because they’ve been through so many failed attempts.

Bill recalled enduring a classic Hollywood-style intervention, with family and friends surprising him in a kind of gang-shaming.

“You put a person in the center of a room and everyone tells them what a jerk they are,” said Bill. “I just thought, ‘OK, shoot me now.”’

Young people get help more often because the symptoms of addiction are visible. But those symptoms can mimic those of old age — poor balance, memory loss, disorientation.

“If you are 20 and you have the shakes, everyone thinks you are an alcoholic. If you are 80, people think that’s pretty normal,” said Oesterreich.

HOW IT SAVED A LIFE

A reporter announced he had come to find seniors recovering from alcoholism.

“Oh, you want success stories,” snapped Doug, 65, Maple Grove, who looked like a wealthy banker in a black golf shirt.

“Well, you are going to hear a lot of disaster stories before you hear that. ‘What have I been through?’ ‘Why is dad drinking so much?’ ‘My wife threatened to leave me.’ ”

About 15 clients sat in folding chairs around the perimeter of a meeting room. Several laughed bitterly about previous programs that had failed to help them.

“There was one of those where I was three-and-a-half hours on a computer with hundreds of questions,” said Steve, 69, of Lake Elmo. “Do you beat your wife? Do you abuse children?”

“Are you afraid of doorknobs?” chimed in Bill. “If you check ‘yes’ to all the questions, you will never get out of there, so you lie like a son-of-a-bitch. 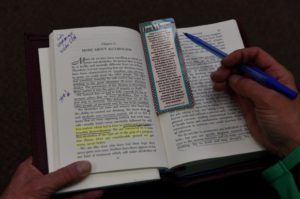 Later, in her Stillwater apartment, Burkhow recalled how alcohol took her life away, one piece at a time.

She hit bottom when her sister found her lying on a couch, unable to stand up.

“She thought I had a stroke. At the hospital, they asked me if I was drinking anti-freeze. I said, ‘Nope, just 100-proof, day after day.”’

Since then, her life has taken the strangest twist of all. Vicki Burkhow has become one of those elusive success stories.

Surrounded by donated furniture, with photos of her husband and dog looking down at her, she was clear-eyed, alert and optimistic.

“I have to live” — she waved around her modest apartment — “frugally, but it beats being dead,” she laughed.

“I am happy as a lark. Silver Sobriety saved my life.”

Bob Shaw
Bob is a 40-year veteran (yes, he is grizzled) who edited one Pulitzer Prize winner and wrote two that were nominated. He has also worked in Des Moines, Colorado Springs and Palo Alto. He writes about the suburbs, the environment, housing, religion — anything but politics. Secret pleasures: Kayaking on the Mississippi on the way to work, doughnuts brought in by someone else. Best office prank: Piling more papers onto Fred Melo’s already trash-covered desk.